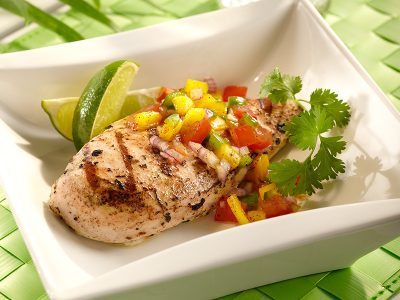 Lee Ann Whippen is a connoisseur of BBQ. She’s spent over 15 years as the lead pitmaster for the Wood Chick’s BBQ Competition Cooking Team. As chef/partner of the urban Chicago q, Lee Ann now spends most of her time in Chicago, where she cooks on her Large Big Green Egg nearly four nights a week on the 18th floor of her high-rise apartment. Her XLarge EGG resides in Virginia where Whippen spends the remainder of her time as the owner of Wood Chick’s BBQ Restaurants & Catering Company. Read more here!

The Grilled Island Chicken breasts are bathed for several hours in a coconut milk marinade before grilling, and then topped with Tropical Salsa, turning chicken into a dish that family and guests will ask for repeatedly.

To make the marinade, using a whisk, mix the coconut milk, cilantro, cinnamon, lime juice and jalapeno in a small bow. Place the chicken breasts in a large shallow dish and pour the marinade over the chicken to cover. Cover the dish with plastic wrap and refrigerate for 2 hours.

Remove the chicken breasts from the marinade and discard the marinade. Place the chicken on the Grid and close the lid of the EGG. Grill for 10 to 12 minutes per side, until the thermometer reads 71°C/160°F.

Place the chicken breasts on plates and top with the salsa. Garnish each plate with lime wedges and a sprig of cilantro.